One moment the trees are bursting with blossom and the next they are gone only to be replaced by the emerging signs of fruit. The next part of the process is the June drop - a period of fruit shedding that occurs naturally. Once the fall of fruit is complete, the trees can be assessed to establish whether any pruning is required to help those remaining on the trees to develop into mature fruits. So don't be alarmed if you see small fruits on the orchard floor over the next few weeks. 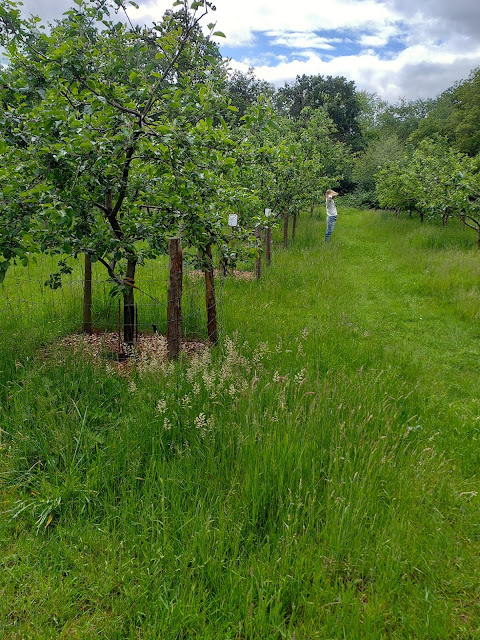 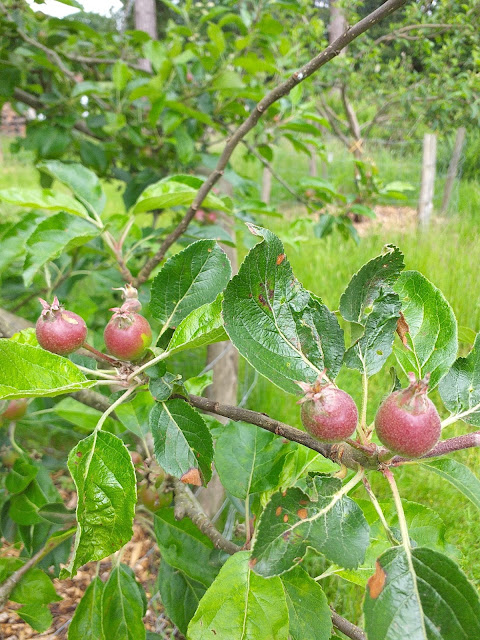 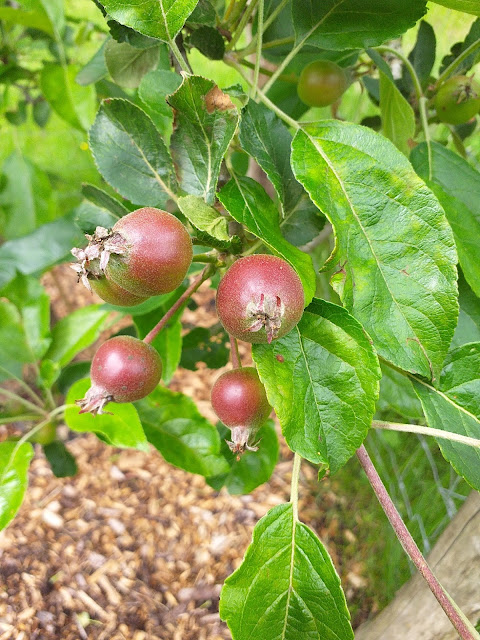 The work never stops and the Orchard team are always planning ahead. Recently, we successfully collected manure for application in March 2023 - 50 bags of the good stuff! It was hard work and so many thanks go to Peter, Philip and Nigel. 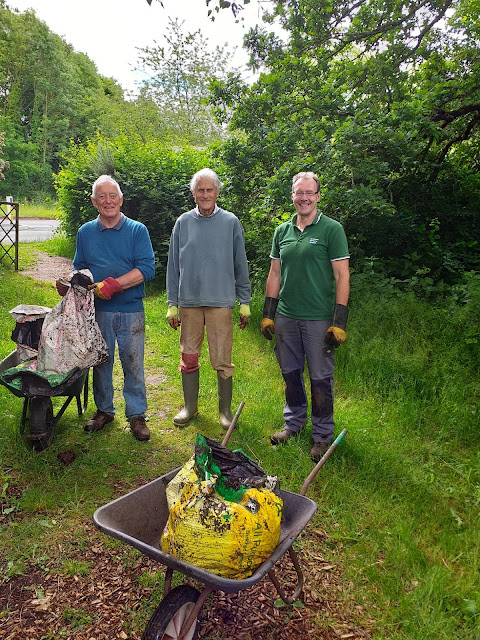 Lastly, if you have been down to the Orchard this extra long bank holiday, you may have spotted our Deer'dre adorned herself with a red, white and blue accessory or two to celebrate the Platinum Jubilee. She's even put some bunting up for the occasion! 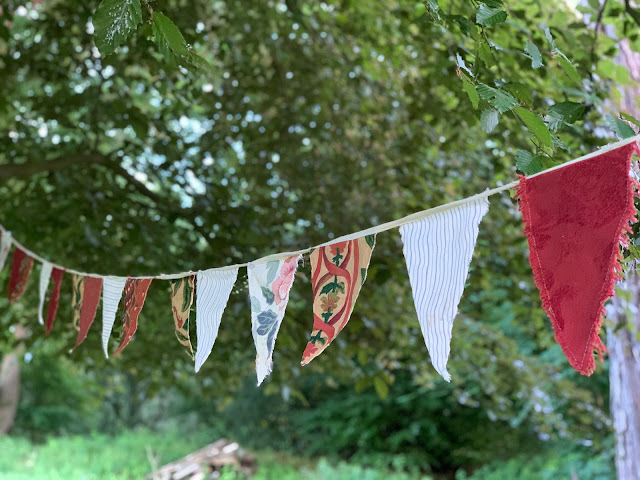 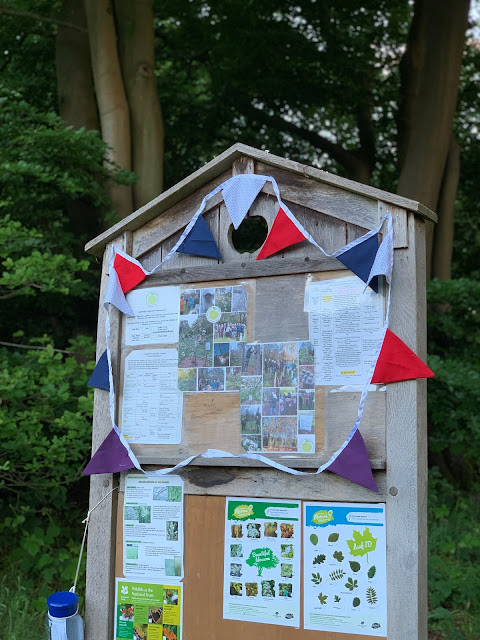 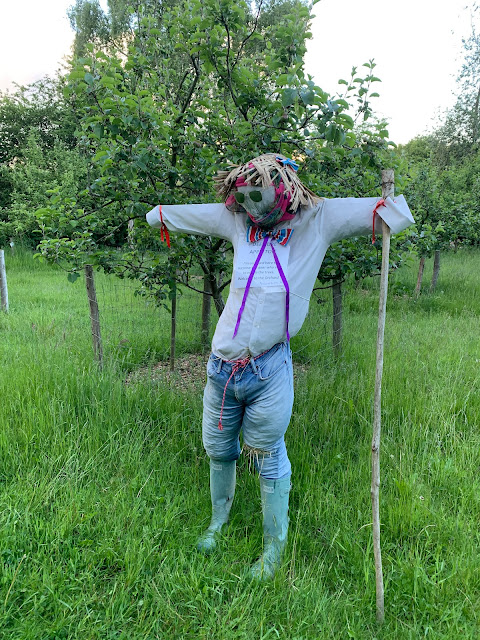 Posted by LIMPSFIELD ORCHARD at 12:13 No comments:

.... 'Deer'dre Appleton! Our scarecrow has been named and here she is pictured standing strong among the blossoming trees doing a marvellous job. Thanks to the local school children for all their suggestions! 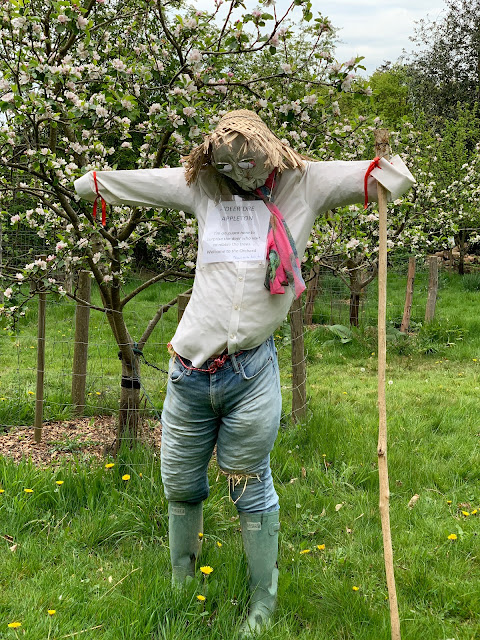 Speaking of blossoms, here are a few photos of the Orchard that were taken at the beginning of May. Quite the transformation from the bare branches we saw in March when our (then) unnamed Deerdre was first employed! Have you been down to the Orchard lately to enjoy the seasonal changes? 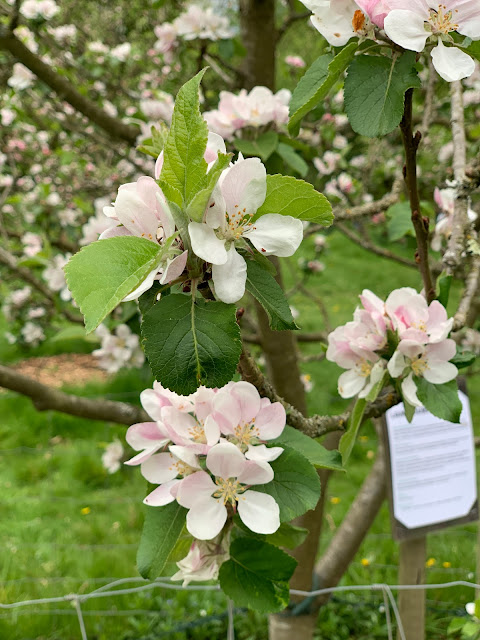 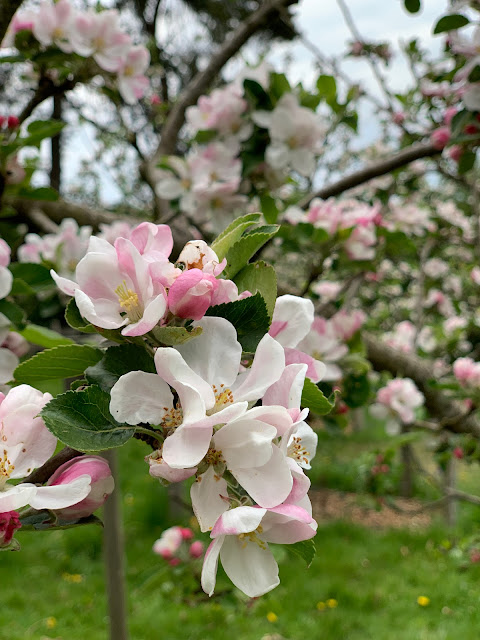 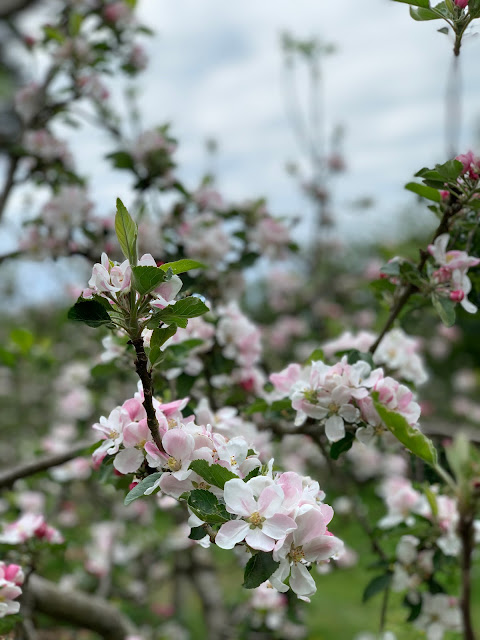 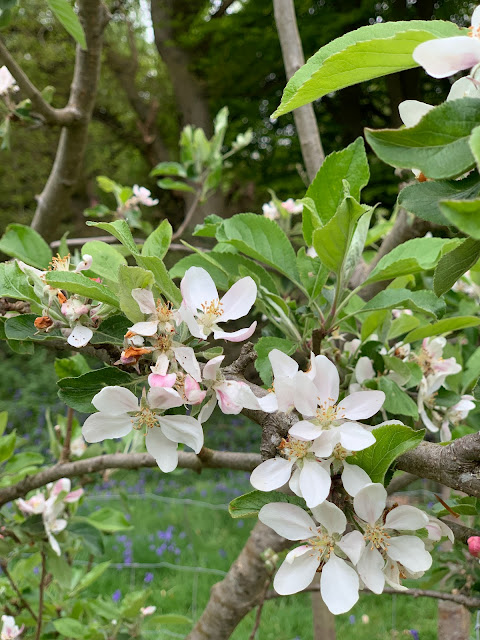 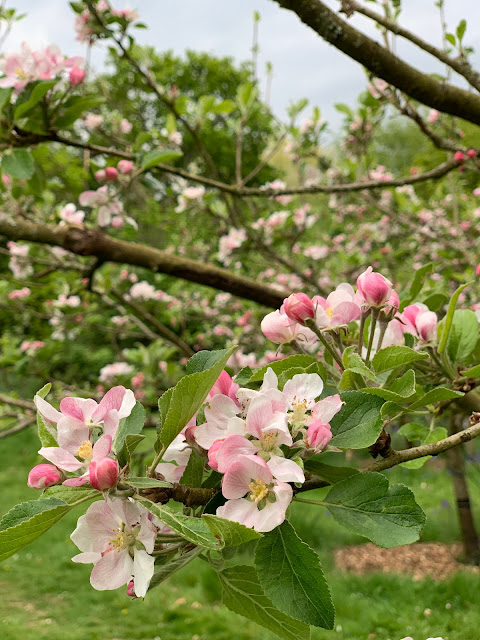 Posted by LIMPSFIELD ORCHARD at 00:42 No comments: 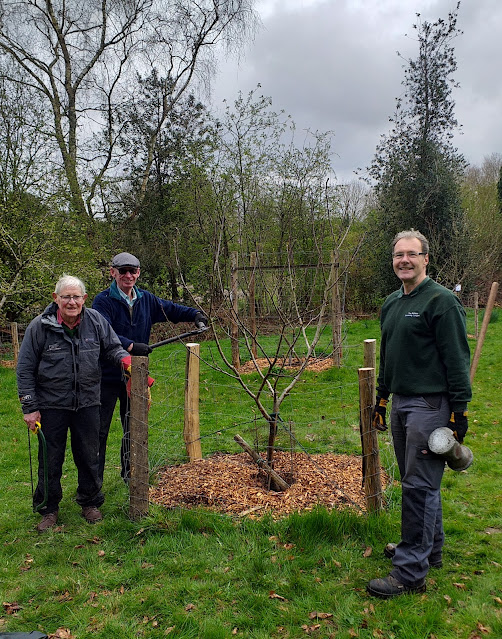 🍎🍏 L-R: Volunteers Bob Paterson, Mike Farmer and Nigel Earnshaw 🍏🍎
Our wonderful volunteers (pictured above) were hard at work earlier this month at one of our working parties helping to reduce the height of the deer guard stakes and wire to allow the Ashmead's Kernel to spread without damage.
Ashmead's Kernal is a very old cultivar, raised at Ashmead House by William Ashmead in the mid 1700's.
This particular one was planted at the Orchard in 2017 and is a connoisseur's apple with a distinctive sweet / sharp flavour. It is in bloom from mid May, ready to pick around mid October and will store until December / February.
We have had no fruit so far! Will 2022 be the year?
Posted by LIMPSFIELD ORCHARD at 11:57 No comments:

NEWEST MEMBER OF THE TEAM

We'd like to introduce you all the newest (and best dressed) member of the Limpsfield Community Orchard Team, made by the talented Stephen Rapoport, James Reeves and their children! Thank you very much!

Put to work before the scarecrow even has a name, we hope the deer will not be visiting while they are on duty. Luckily the local school children have been tasked with naming our newest team member and we are very much looking forward to hearing their imaginative suggestions! So far, ideas include Russell (scare) Crowe and Welly McBooterson. Be sure to check back on the blog where we will reveal the name of our upstanding volunteer in due course. 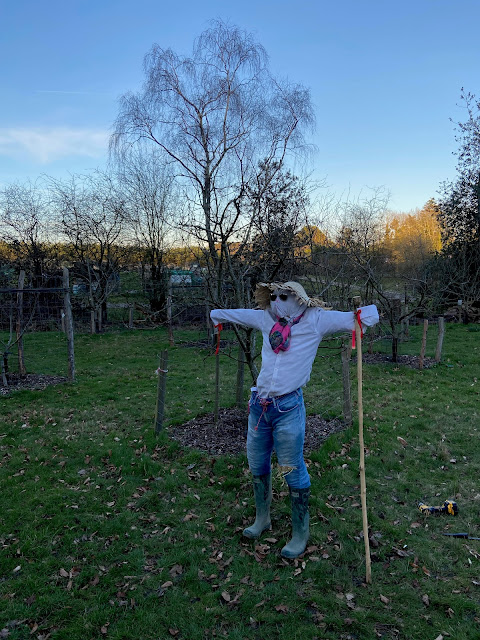 🍎🍏 Our, as yet, unnamed scarecrow 🍏🍎
Posted by LIMPSFIELD ORCHARD at 11:48 No comments:

We will be gathering in the Orchard at 0930 on Wednesday 2nd March for our regular work party.

If you would like to join us please contact Helen directly (helenellson205@btinternet.com). Knowing how many people are turning up in advance helps with planning and coordinating the morning (as well as ensuring there's enough coffee supplies!)

🍎 Weed round each tree site and apply Vitax Q4

🍎 Spread wood chip on each apple and pear tree site (plus damsons). The wood chip is all ready in the Orchard in bags and we have 2 wheelbarrows

🍎 Check and redo wire support systems. In many cases the trees are not properly supported and we need to get this all done asap before the trees come properly into leaf.

Looking forward to seeing you there!

Helen and the Orchard TEAM

Posted by LIMPSFIELD ORCHARD at 14:25 No comments:

If you've visited the Orchard recently you may have spotted our newly constructed dead hedge, hidden behind the laurel. By making a permanent structure of woody material, pruning and hedge clippings, we encourage small mammals to hibernate and beneficial insects to lay eggs where they are warm and dry. Gradually it will rot down, allowing more material to be added year by year.

Doesn't it look great? Many thanks to our wonderful volunteers for their excellent work! 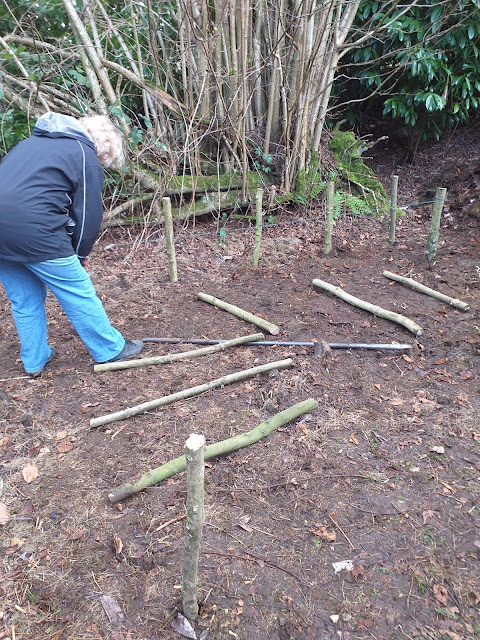 ~ Laying the foundations for the dead hedge ~ 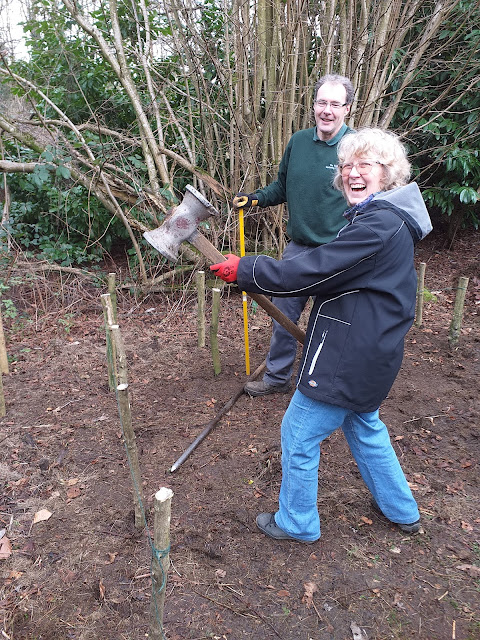 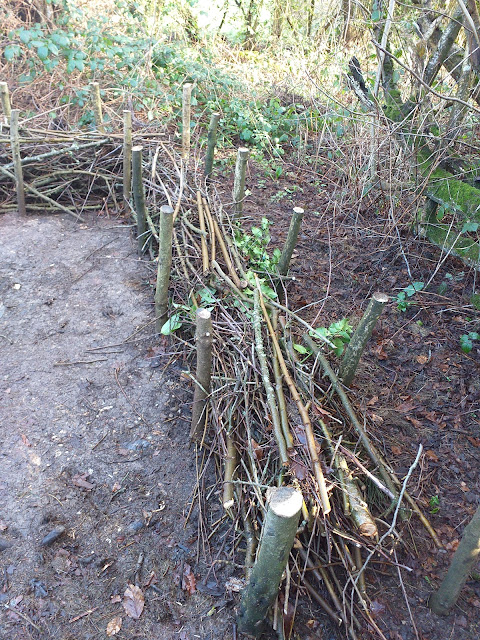 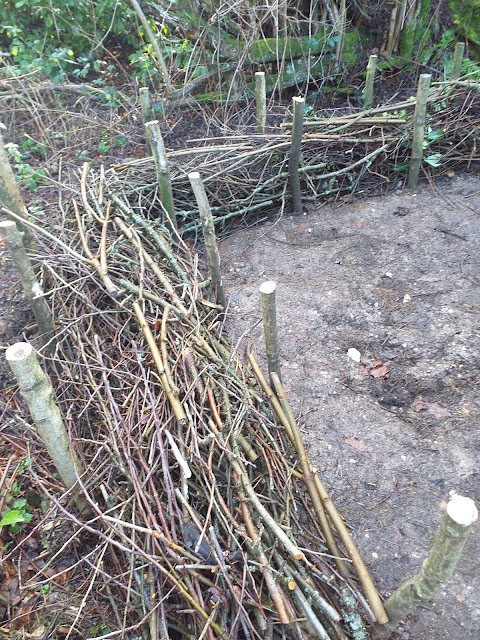 Posted by LIMPSFIELD ORCHARD at 13:14 No comments:

Thank you to all who attended our annual Wassail a fortnight ago. After an enforced hiatus last year it was great to be back and we are lucky to have a wonderful write up about the event by our very own Friend of the Orchard, Carolle Stent.

January is not my favourite month; it is cold, wet and dark, and Christmas with all of its light and celebrations is over. In 2018 I went to my first Wassail and discovered that this is a celebration involving light, fire and ancient ritual in the midst of January gloom.

The Wassail event started inside Limpsfield British Legion. When I arrived North Downs Drummers, dressed in stunning costumes, were seated and an ever-increasing crowd of all ages gathered in the bar area. A bucket collection went around, song sheets were handed out, flaming torches and glow-in the-dark pendants were available for donations and then Andrew Claringbull donned his hat to become our Wassail Master. This is a role that he has fulfilled and developed since he started in 2016.  He explained the ancient origins of what we were about to see and do. I learned that Wassail is timed to mark the beginning of pagan New Year; the time when winter darkness begins to lessen and daytime lengthens; the time when trees begin to awaken. Wassailing is a fertility ritual designed to ensure that the apple crop for the coming year will thrive. 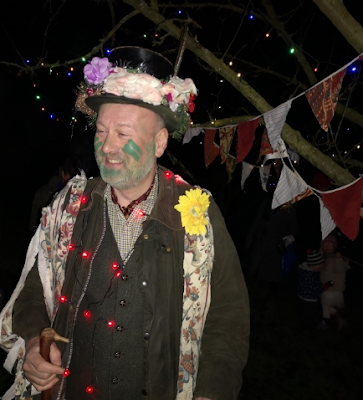 Wassail Master - Andrew Claringbull
Excitement began to build in the assembled crowd, particularly in the young children who were full of anticipation for going out in the dark when they would normally be approaching bedtime. We sang a short song and then regrouped in the car park. Here our noise levels increased as the drum band with their colourfully illuminated drums and headgear swung into action. Imagine the scene, stillness and moonlight above with a riot of coloured lights, noise and action below. Flaming torches were lit. The Wassail Master and his two delightful young Wassail princesses along with the drum band led the procession along the road across the Common, up Grub Street and then through the wood. I tried to estimate the number of people taking part and guessed that there were at least 150 of us. A muddy path goes down steep steps and then snakes through woodland. As you leave the wood you go up a steep slope and at the top, through the trees, we were greeted by the sight of a huge bonfire and the full moon. 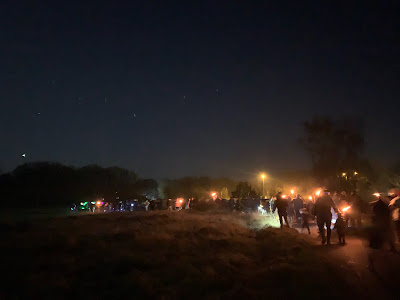 Procession from the British Legion down to the Orchard 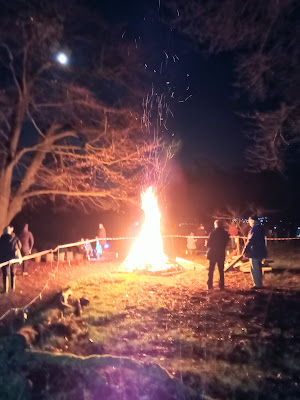 Arriving in the Orchard you were drawn to the King Tree. This glorious apple tree was decked out in finery with bunting and fairy lights adorning its branches and a ring of tea lights around its roots. The Wassail Master and the two Wassail princesses stood beneath the tree and we wassailers gathered around them in a circle. The drum band and the wassailers ensured that the noise level did not abate. Once all were assembled, the ritual began. Andrew ably fulfilled his role in directing the libations to the King Tree. After he declaimed to the tree and blessed it to be fruitful a steaming bowl of cider was produced and a piece of toast dipped in cider was given to the tree as ‘food’. One of the tiny princesses could just reach a bough of the tree to balance it in place. Next, salt was sprinkled around the trunk and finally cider was poured on the roots. The ceremony around the tree concluded with song. Owing to covid the wassail cup could not be handed around but mulled cider and apple juice were available for all. By this time the warmth of the bonfire was more than welcome. 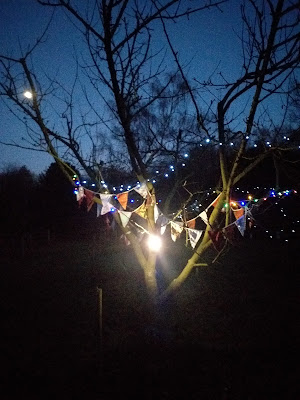 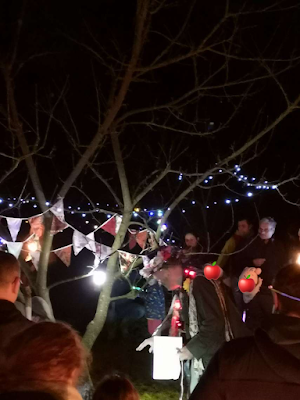 Wassail Master directing the libations at the decorated King Tree

Thanks are due to all who made this wonderful event possible. The obvious ones are those involved in the pageant – Andrew Claringball and the North Downs Drummers. Less obvious are all the volunteers who put the event together, built and tended the bonfire, adorned the king tree, illuminated the woodland, provided drinks, produced song sheets etc. This wonderful annual event could not happen without a team of volunteers. It is the main fund-raising event of the year for Limpsfield Community Orchard. The Orchard would not exist and it would certainly not continue to thrive without constant care and attention. If you feel that you can help in any way please contact Helen on 01883 723160 (orclimp@gmail.com).  I promise you that anything you give to this hidden gem in our community will be amply returned to you in enjoyment.

Posted by LIMPSFIELD ORCHARD at 10:54 No comments:

From the Limpsfield traffic lights continue along the A25 and go straight on up the hill towards Westerham, past Limpsfield School on the LHS.

Cross over on foot to the north side of the M25 and walk up Grub Street ….you will see the sign for the Community Orchard on the RHS. Go down the steps and follow the clearly marked path through the woods….you will reach the Orchard after about 5 minutes walk.

There is a way out on to the A25 at the south end of the Orchard….but the pathway back along to Grub Street is much safer (particularly for children) and much prettier when crossing the A25 back to the Car Park

You might of course come down through Limpsfield Village….in which case drive up to the traffic lights and turn left on to the A25 and continue as above.

You could support us by becoming an Orchard Friend. You will receive invitations to Orchard Events such as Tasting Days and our Winter Wassail as well as being able to join our regular Working Parties.